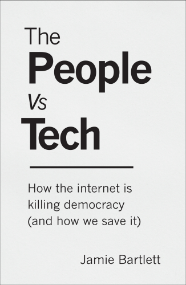 Technology is a powerful force that few of us can truly escape. It controls so much of our everyday lives as we rely on it for everything from ordering a taxi to doing our taxes. But such conveniences mask the extent to which technology could profoundly disrupt the existing social order.

We have seen foreign governments use social media platforms like Facebook and Twitter to send propaganda messages to swing voters. We see the emergence of decentralised blockchain technologies which seek to undercut the supremacy of the state. And the largest tech companies control the algorithms that are shaping our behaviours, preferences and ideas. Technological growth combined with the uncertainty around artificial intelligence could create a world in which democratic institutions start to fall apart.

In the People vs Tech, Jamie Bartlett considers these threats and the ways in which they can be overcome. Bartlett’s essential thesis is that unchecked technology poses a grave threat to democratic institutions, norms and traditions. He identifies six pillars of democracy which are at risk of collapse under the weight of rapid technological development. It is worth mentioning from the outset that Bartlett focuses on the western liberal tradition of democracy. There is little that is offered in terms of a critique of the norms that this tradition represents: capitalist orthodoxy, rampant inequality, social injustices. Bartlett is concerned about how technology poses a threat to the status quo and the economic interests of the middle class. In his estimation, the middle classes are the only true defenders of liberal values and democratic expression. This point aside, Bartlett is able to present a detailed accounting of the ways in which our civic lives may in jeopardy if technology starts to overwhelm the political sphere.

The power of social media

Whether social media been good for representative democracy is a difficult question. An optimistic view is that social media platforms have given people easy access to their elected representatives and broadened the terms of democratic debate. Bartlett argues that social media platforms have actually contracted public debate rather than expanded it. This is because of a wide range of new media and communications techniques that are driven via social media. Social media companies are advertising companies, and political parties in both the UK and USA have experienced great success by targeting political adverts at specific voters. Rather than sending out the leaflet which is the same for everyone, you can send out as many personally tailored messages as you want through Facebook or Twitter. This allows political campaigns to craft messages that appeal directly to issues that individual voters are most concerned about. When political advertising is no longer universal, this causes the public sphere to shrink. This form of advertising, so-called micro-targeting, was used to great effect in the United States in 2016, and during the Brexit referendum.

We can now live in our own little attention bubbles and tailor our consumption of news to suit our political preferences and tastes. Bartlett expresses concern about the corrosive effects of these types of political communications, but there is not a well-formed consensus on the effectiveness of these methods.  In time, they will probably be much more effective, but in the present, some of Bartlett’s concerns do sound a little alarmist.

“Tech firms are already transferring their economic power into political power through lobbying, but they differ from ‘traditional’ monopolies in important ways: by owning the platforms on which material is published, they have an important influence over public opinion and activism itself.”

Existing legislation to protect consumers against bad practices and break up monopolies are rendered ineffective against today’s tech companies. Uber is an interesting case study.  When TfL suspended their license due to concerns around passenger safety, Uber launched a petition to protest the decision which received over 40,000 signatures in a few hours. As tech companies are so beloved by their users they are harder to regulate than traditional mass media companies.

Bartlett goes on to investigate the far-reaching implications of the ideology of dataism. This is the belief, which underpins the political philosophy of Silicon Valley’s best and brightest. It posits that any social or political problem can be solved by analysing more detailed data sets. From this, we get the optimism about the “internet of things” in which devices in the physical world, such as your fridge or washing machine can be hooked up to the internet. Everything in this world becomes a data point which can be analysed for trends and patterns. But the implications are much more profound than smart fridges: data analysis and complex algorithms could also be used to solve all kinds of political problems. Deploying public services or deciding social policy can be made easy when everything is drawn from ever-larger pools of data. The fear that Bartlett expresses is that control of these massive data sets, and the expertise of the people analysing them could pose a direct challenge to the legitimacy of the state.

“Armed with the best tech and the most skilled engineers, maybe Google or Facebook could be the only ones who could solve sophisticated cybercrime (perhaps committed by a powerful AI from a hostile country?), fix computer bugs, predict and pre-empt economic shocks, run the National Grid or protect the cyber defences of the big banks – cyber security in the public sector is predictably understaffed and under-skilled.”

As advances are made in machine learning, and the opportunities for complex problem solving becomes exponentially greater, giant tech companies could hoard their tech and insights. They can claim proprietary ownership over life-changing technologies that would be able to serve the public good. The implications around artificial intelligence are profound; Tesla boss Elon Musk has compared it to “summoning the demon.” Once machine learning starts to pick up steam, how thing will end will be largely out of our control.

With the rise of dataism and the preference for a world outside the control of the government, we have seen the rise of blockchain technologies. We now have a new generation of crypto-anarchists who wish to resist the surveillance culture of the state by establishing new virtual and non-hierarchical forms of organising. The wish to create more accountable and transparent public spaces is one of the central aims of this political activism. The rise of bitcoin and other cryptocurrencies poses a direct challenge to the legitimacy of the state and central banks. The world which the crypto-anarchists want to bring into existence is one in which new forms of de-centralised organisation replaces the state. This world-view is informed by a libertarian suspicion of state power and unlicensed coercion; it wishes to see social relations exist only between individuals without the need for any kind of intermediary. It places great faith in the emancipatory power of technology, which rightly may be too optimistic.

Bartlett also examines the impacts that technology will have on the workforce. If technology could be used in the future to solve our political problems, then is also being used to solve economic ones too. Increases in technological power could lead to large-scale automation across many sectors of the economy. Soon it will not just be manual jobs that are replaced by machines, but also routine or high-level cognitive jobs. For example, roles like legal secretaries which require the analysis of case law and written judgments could easily be undertaken by machine learning. These changes could lead to a great degree of job displacement for both high and low earners. This disruption could pose a threat to the democratic system of government. To mitigate against the impacts of automation some policy analysts have argued for a universal basic income payment to be made available to support people as they navigate the changing labour market. On its face, UBI is quite an attractive idea, so long as it is not taken as a pretext to dismantle other forms of social security payments, such as unemployment or disability benefits. But this has not been the first time that social sciences experts have predicted a collapse of the workforce due to technological progress. The economist John Maynard Keynes famously predicted that advances in technology would lead to a part-time 15-hour working week in prosperous countries within 100 years. In fact, we are working more than ever, and whilst there has been huge job displacement in some areas, new jobs are often created to replace them. What we need to prevent is an increasing stratification of jobs between low skilled service jobs, and highly skilled technical jobs.

The People vs Tech is an interesting if not slightly alarmist book that sets out some of the big threats that technology poses to modern democratic politics. The book remains uncritical in its praise of modern neo-liberal orthodoxies but is largely perceptive in highlighting the ways in which technology threatens to undermine western systems of government. We should rightly be concerned about the huge and unaccountable power of large technology companies. They wield considerable power and have the ability to shape our personal and civic lives. While the book contains little analysis on the intersection of technology and capitalism, it does outline some intriguing insights about how technology will either lead to our emancipation or destitution.